Why Do People Bother Buying Toys for Kids, part 18

When my husband bought this horse trough four years ago, he didn't realize he was buying a parkour gym:


Turn it a different way and...


And then there's that huge cable spool that our neighbor gave us:

But wait, he's not finished:

Posted by Unknown at 9:13 PM Links to this post

Encounter with a former student

Something completely unexpected changed my day for the better today.

Late in the morning, my daughter and I rode (on my Xtracycle) to Down to Earth to pick up some plants and Sluggo.  It was a moderately sunny day, cool but not too cold; a nice change from the normal clouds and rain.

When I was unlocking the bike after our errand and preparing to leave, a couple of young people, a man and a woman, walked by.  The young man did a double-take at me..."I know you, you're [insert my full name here]!" Turns out he was a student of mine several years ago at my previous school - I didn't recognize his face, at first, but recognized his voice and knew immediately who he was.  He was all smiles and gave me a hug.  Turns out he's graduated and a couple of years into studying at LCC before a planned transfer to UO.

What made this encounter so rewarding was that he shared with me that he now understood something I've tried to teach my students: That what they are learning at this time might not be useful to them right then, but that they would need it in order to "level up" in mathematics; i.e., that it would be something that would be useful to them later in the mathematical sequence of learning.  This young man shared with me that he had learned the validity of that statement, an important connection, I think, to a mature outlook on education for a student.  He also shared that he had been able to use what he learned in my Geometry class.  Both of these things he shared were gratifying to hear.  A former student was happy to see me!  He learned something useful from me!  Hooray!

When I was a teacher-student, an adviser of mine told my class that in our careers as educators, if we could count one, just one student who we had been able to positively influence, then our careers would have been worth it.

Achievement unlocked.
Posted by Unknown at 7:45 PM Links to this post

Why Do People Bother Buying Toys For Kids, Part 17

When there's so many doorways in the world? 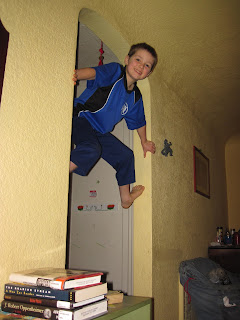 Why do people bother buying toys for kids, part 16

When dad is a human carnival ride?

Posted by Unknown at 5:41 PM Links to this post

Why do people bother buying toys for kids, part 15

...When all you need is a broom cupboard?

Posted by Unknown at 12:29 PM Links to this post

This is what happens when you allow your children to watch too many Astaire/Rogers movies.

Posted by Unknown at 6:43 PM Links to this post

I wrote this stuff